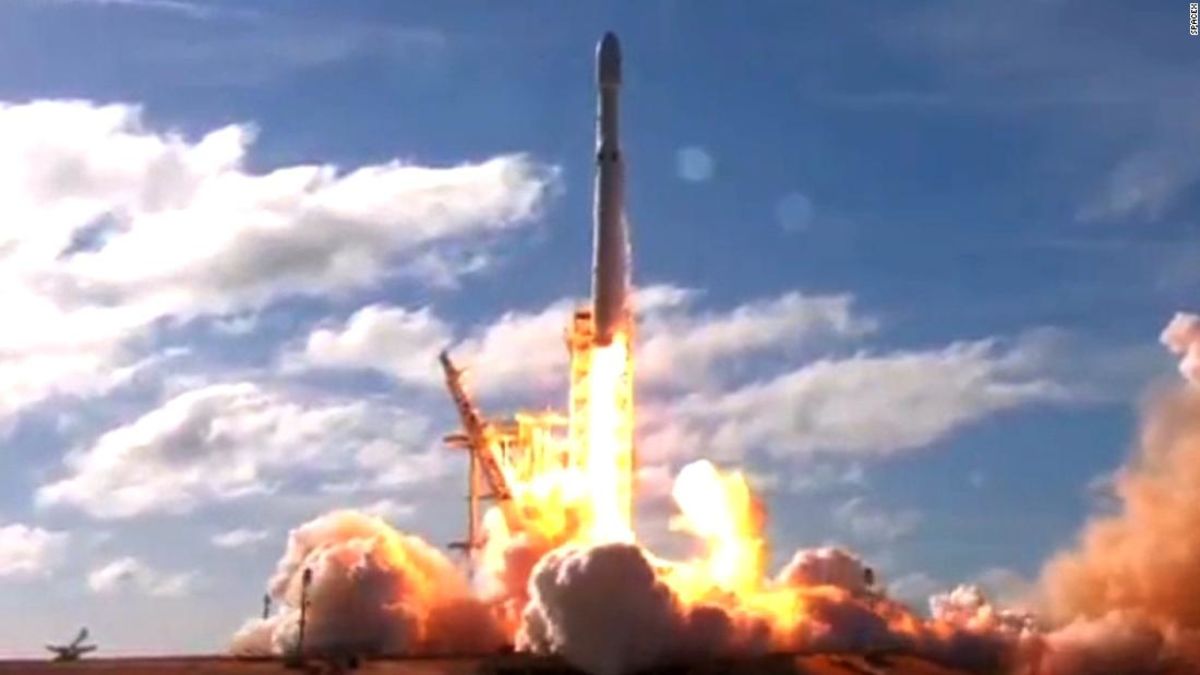 (CNN) — When temporary no-fly zones appear above US rocket launch sites, airlines end up paying huge fuel costs to fly around them, while passengers have to spend more of their precious time in the air.

In fact, a new study by Embry-Riddle Aeronautical University calculates that all the extra fuel required to avoid restricted airspace during rocket launches costs airlines cumulatively between $10,000 and $30,000 per liftoff.

One launch can create a ripple affecting thousands of airline passengers. Last February’s SpaceX launch of its Falcon Heavy rocket delayed 563 airline flights resulting in 62 extra miles added to flights across the southeastern United States, according to a report by the Air Line Pilots Association. Each flight was delayed an average of eight minutes.
All this “results in planes sitting on the ground, longer routes, more fuel burn and longer flying times for passengers,” said a written statement by A4A, an industry group that represents most major US airlines.

But the issue points to a larger problem: America’s national airspace — shared by the fast-growing aviation and commercial space industries — has been getting more complicated as more airliners and rockets take flight. That trend is expected to continue.

By 2036, airline passenger traffic is expected to nearly double to 7.8 billion worldwide — and grow to 1.1 billion in the US, according to the International Air Transport Association. At the same time, US commercial spaceports are emerging in New Mexico, Alaska, California, Florida, Virginia, Texas and Oklahoma. (On Monday, the UK announced its first commercial spaceport, which will be built in Sutherland, Scotland.)

Meanwhile the cost of keeping safe distances between rockets and airplanes threatens to grow.

Nine years from now, each lift-off could cost airlines as much as $200,000, if nothing is done to better coordinate airplanes around launch sites. By 2037, that amount could grow to $300,000 per launch.

“Those number are huge,” said Dr. Janet Tinoco, co-author of the Embry-Riddle study, believed to be the first to measure the cost of rocket launch zones on the airline industry. The figures are based on the projected growth of both Florida’s space industry and airline traffic.

Typically, passengers don’t necessarily realize their flight has been impacted by a rocket launch, Tinoco said. The FAA warns airlines weeks if not months in advance to give them time to re-route flight paths.

A re-routed flight may leave the gate on time — but a flight could last perhaps 30 minutes longer than usual, depending on the changed route.

“If for some reason the costs did start to rise for airlines, of course it would be up to the airlines whether they wanted to eat those costs, or pass it on to consumers,” said aerospace engineer Rodrigo Firmo, who helped conduct the Embry-Riddle study. “But that’s a business decision for the airlines.”

A better way to get out of the way

This might be a good time to mention an obviously important detail at the heart of the entire matter: You can’t steer a rocket. Once it’s launched, pretty much all you can do is get out of the way.

“They launch and they’re off,” laughed Tinoco. “It’s not like you can command a rocket to veer left to a different altitude.”

So, is there a better way for airlines to get out of the way? The FAA has been testing new technology that may help.

A tool the FAA calls Space Data Integrator — or SDI — would provide an interface between the airlines and the space industry.

SDI is designed to feed real-time data about a rocket’s trajectory and mission into the FAA’s air traffic systems. That data would be accessible in real time by air traffic controllers. Ideally, everyone would know where the spacecraft is supposed to go, Tinoco said.

Making this kind of timely rocket-tracking data available to air traffic controllers might allow the FAA to safely shrink the sizes of their no-fly zones near launch facilities, helping to save airlines money and passengers time.

“And it could also help us to release blocked airspace more quickly so it’s available to the other users of the system,” then-FAA Administrator Michael Huerta told a space conference last year.
The FAA has been given a February 2019 deadline to come up with new commercial space regulations, which could include SDI.

Further in the future, some experts have envisioned dynamic no-fly zones that move in concert with a rocket — instead of blocking off huge areas of airspace around a launch pad.

Using real time data, an area of restricted airspace for each launch could be limited to a 5-mile sphere around a rocket as it moves through the airspace, Tinoco said.

For right now, industry leaders say the space and air traffic communities recognize the importance of solving these challenges.

“These are solvable problems,” said Tinoco. “And we’re getting there.”

Record-breaking travel destinations to visit around the world