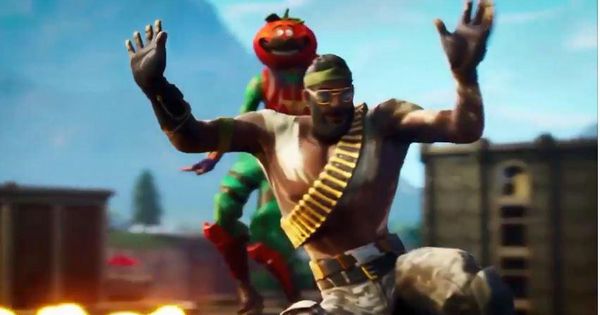 Guessing the new theme of a season in Fortnite: Battle Royale can be a tricky task. So far we’ve had medieval, space, superhero, and the somewhat unfocused Season 1. The fiction of Fortnite is loose to the point of nonexistent, and it means that a season could be themed around literally anything: it could be politics, it could be athleisure, it could be fine dining or it could be the Russian Revolution. Everything’s on the table here, and Epic Games’ ability to tie a comet impact to a superhero theme shows just how difficult it can be to connect up the events of one season to the next one. That doesn’t stop us from trying, however, and there are plenty of theories about Season 5. Right now one of them sort of dominates the rest, and that’s time travel. Let’s get into it.

There are a few hints here. For one thing, strange rifts and cracks are opening up all over the map, and sometimes people might describe such fictional phenomena as tears in the “space-time continuum.” Clearly, we’re putting the emphasis on “time” for that particular phrase. This is all pretty weird, of course, but it’s still not too much of a leap to think that these portals are going to suck various parts of the map through time and replace them with something else.

Another clue: the original trailer for the Playground Limited Time Mode included a bunch of in-game building creations that all seemed to fit a time travel theme: we saw the Sphinx, the pyramids, a castle and a wild west ghost town. These would also support a desert theme with elements of western and Ancient Egyptian, which I suppose would qualify as time travel as well. Fortnite: Save The World introduced a desert biome semi-recently, and so we know that Epic has the assets in place to make switch things up, maybe even transforming the whole map to something more dune-like for the course of the season.

And while we don’t have many leaks about battle pass content yet, we do have a tiny bit. Contrails don’t give us a whole lot of cues as to theme, but there’s nothing in these leaked contrails that would necessarily contradict a time travel theme. Toilet paper, for one thing, could easily pair with a mummy skin, vines could pair with a caveman skin, glitching with a futuristic one. We’re reaching here.

And finally, and perhaps most importantly: it would work. Fortnite seasons like a lot of aesthetic leeway, and time travel would allow Epic to basically just go nuts with whatever skins and points of interest that it wanted, and that feels like a very Fortnite thing to do. There would just be a lot to work with, and that’s what both the developers like to see.

The Best Portland, OR Travel Tips From Our Readers

Oneida County fifth in state in travel and tourism money

Travel money: the best cards to use abroad for holiday spending