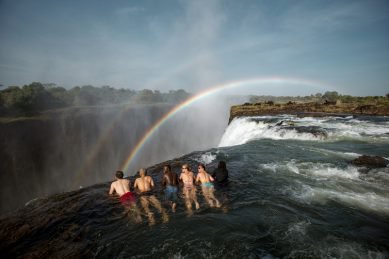 We all remember picking up a copy of the Guinness World Records book as a kid and getting lost in its pages filled with weird and wonderful achievements, says Nicky Potgieter, Leisure Marketing Leader, Flight Centre Travel Group.

“Why not relive that nostalgia by visiting some of the cities, towns and countries that have set their own incredible world records? On your next holiday you could head to the top of world’s tallest building, eat at the oldest restaurant and ride the highest outdoor elevator – fascinating Guinness World Records set by cities, countries, and states around the world.”

To kick-start your travel planning, here’s a list of destinations you should consider for a memorable, record-breaking break.

Coincidentally, Rome is also the place where the largest pizza was made in 2012, with a total surface area of 1,26 square kilometres.

Nature-lovers looking for a record-breaking break should make their way to Yellowstone National Park in the U.S. Set in Wyoming, the park spreads into parts of Montana and Idaho and holds the title of the oldest national park, declared so back in 1872.

The park is home to stunning sites of alpine forests, hot springs like multi-coloured Grand Prismatic Spring, and geysers, most infamously, Old Faithful, and Steamboat — the world’s tallest currently-active geyser.

Victoria Falls is often called the largest waterfall in the world, although it is neither the highest nor the widest. It’s curtain boasts the largest volume of falling water.

Known as Mosi-oa-Tunya (the smoke that thunders), Victoria Falls is shared between the countries of Zambia and Zimbabwe, and constantly tops the list of must-see attractions in the world.

A worst nightmare for those with anxiety is the Shibuya crossing in Tokyo Japan. During rush hour, this pedestrian crossing could fill a football stadium with all of the people that cross.

As many as 2 500 pedestrians cross every time the signal changes. Not so fun to be caught in it, but quite a feat to bear witness to it from afar.

On the other spectrum of Shibuya is Spreuerhofstrasse Street. You’d barely be able to slip through this incredibly narrow street located in Reutlingen in Germany. This tiny street is only a foot wide at its narrowest point.

Germany also holds the world record for the most beer steins carried at one time (a total of 29) by Oliver Strümpfel at the Gillamoos fair in Abensberg.

It’s quite common for the UAE to feature when it comes to superlatives these days. Dubai’s Burj Khalifa is the tallest building in the world at 829.8 metres, while its JW Marriott Marquis Hotel is 355 metres high with two towers that reach 72 floors.

Head to its bar on the top floor for a birds-eye view of the city and a favourite Dubai nightspot, the Vault.

Constructed between 1903 to 1913, it has a total of 44 platforms, according to Guinness World Records. It also has a secret unused platform below the Waldorf Astoria Hotel.

Pound to euro exchange rate: Sterling hangs on ECB interest decision – Will the...