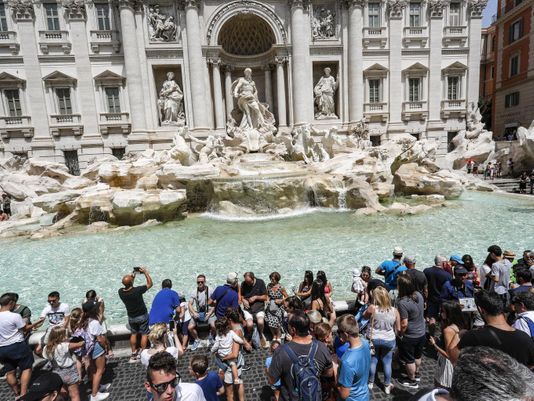 Rome is the 22nd top up-and-coming trending summer international destination for the month of July, based on the latest booking data from American Express Travel. Tourists are seen here next to the world-famous Trevi Fountain during a hot day in July.(Photo: GIUSEPPE LAMI, EPA-EFE)

What are the top trending international destinations so far this summer?

Istanbul is at the top of the list of 25, but cities all across the world made the cut. From Buenos Aires to Nairobi to Tokyo, travelers this summer are willing to go far and wide. Four Italian cities are also on the list.

American Express Travel looked at its booking data to determine which cities had the most year over year growth this July.

Jen Rubio, co-founder and chief brand officer of the Away travel brand, has a few ideas on how to travel like a local in a few of these cities.

For Lisbon, which earned the No. 2 spot, Rubio recommends wandering through Alfama, the city’s oldest district which has cobblestone streets, ancient churches and ornate bird cages. The Santa Clara 1728 hotel has just six rooms and limestone staircases.

For dinner, Cervejaria Ramiro has the best seafood in Portugal, particularly its scarlet prawns, Rubio says. End the night with cocktails and dancing on Pink Street.

“Lisbon has so much diversity and charm in one city—rich with history, a bustling creative scene, beaches, incredible food, and more,” Rubio says.

Cosmopolitan Colombia comes out after years of war

Tokyo, the No. 18 up-and-coming summer destination, is home to one of Rubio’s favorite bookstores in the world, Daikanyama T-Site. Aside from the book collection, she loves the architecture and courtyard.

For food, she recommends Sugalabo even though it’s hard to find and requires a referral to get a table.

“Chef Yosuke was classically trained in France under Joël Robuchon, so he cooks contemporary French cuisine using Japanese ingredients and traditions,” she says.

Shima is another good pick. It is tucked away in the basement of an office building. Rubio suggests ordering the wagyu sandwiches that come in a wooden box.

“Tokyo is a really magical city: vibrant and eclectic, and the people are incredibly kind and gracious,” she says.

Mexico City, which earned the No. 20 spot, has beautiful parks and neighborhoods.

Chapultepec Park is twice the size of Central Park. Rubio recommends spending a few hours there and then heading to Contramar for a late lunch that should include the tuna tostadas and coconut flan.

The Condesa neighborhood is also worth a wander.

Car Hire Hidden Fees; What to Look Out For When Renting a Car in...

Off-Season Vacation in the Greek Islands: Spring in Mykonos

The 21 most overrated travel destinations around the world