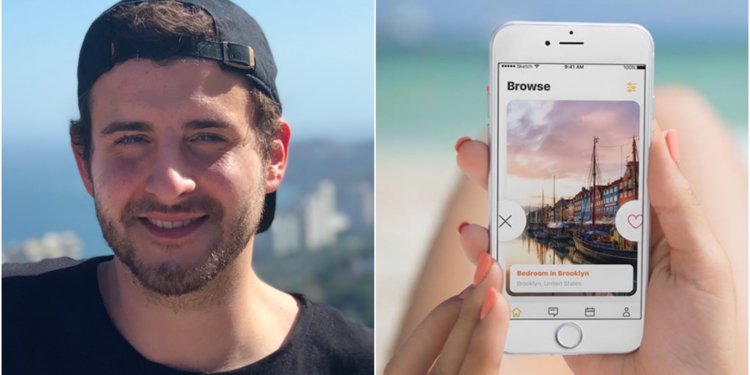 The youngest man to travel to every country in the world wants to make conquering the globe easier for everyone else — and he swears it has nothing to do with making money.

29-year-old James Asquith, a London banker who had visited all 196 countries by the age of 24, recently launched Holiday Swap, an app which aims to get people to swap homes with other people when they travel.

“You have a picture of a property and you swipe,” Asquith told Business Insider. “A lot of people who’ve used it said ‘I feel like I’m on Tinder.’

However, unlike Tinder, Holiday Swap works on a global rather than local scale, meaning you can see properties on the more than 40 countries across six continents the app currently covers.

Asquith added that you can filter your settings “for things like ‘I want a place with a good atmosphere or a young crowd,’ by country, or whatever.”

When someone “matches” with you, you get a notification and a “pin” added to your map, as well as the ability to chat to the user and see their availability calendar.

“Then you basically have that connection,” Asquith said. “Say you’re going away for a week — you might look at your map have have 30 cool places [you can go], but the people as well.”

It’s only $1 per bed a night to swap through the app, and the users can also request a fully refundable deposit if it makes them more comfortable, money which the app protects.

The new app is now available on both iOS and Android, and Asquith says some users have already started swapping.

When Business Insider checked out the app, it was clear that a proportion of the profiles are fake:

Asquith said these are leftovers from an earlier testing process, and are being phased out.

He added that profile are manually vetted, rather than automatically with ID checking like with Airbnb. If a profile doesn’t meet the site standards, the moderation team will suspend the account.

There are also some pretty nice looking properties already on the app, too, like this one:

While the company has yet to officially launch or do a marketing push, Asquith said the app is “starting to market and expand our user base largely and internationally.”

While you have to have a space to list in order to register on the app, it’s about more than just home swapping.

“We are aiming to become a fully integrated travel tool that reduces the cost of travel,” he said. “Another way of looking at Holiday Swap is a social media travel tool, that gives real savings and new experiences to all of us, by taking out one of the largest costs of travel.”

One of the ways he’s aiming to do this is through MyMap, an interactive tool where users can place and browse pins of places to visit and things to do “building further on our community feel.”

The company is also building a “guest blog” for travel experiences online.

The goal is to allow users to find other uses not just through the places they have listed for swapping, but also through their blog posts and travel tips.

“People may never swap,” he said. “If I’ve matched with someone that looked cool in Toronto, now I know someone there. You’d link out and make that connection.

“People then might start chatting and not officially swap through the app.”

He added that ultimately “we just want people to be able to use it and to have a tool to actually travel.”

“We don’t want people to use it and then shelve it, we [want them to be] actually going and finding cool things and being able to have it in your map. Everyone loves the aesthetics of a map with pins you’ve travelled to and places you could go to.”

The company has already had partnership interest from “large US tech firms,” according to Asquith, as well as tour companies, airlines, and potential brand ambassadors.

However, however successful the idea may be, he insists he’s not doing it for the money.

“I will never ever sell this company,” he said. “What probably will make it a really successful app for lots of people to use is that I’m not doing it to flip it and make a lot of money.”

In terms of how he plans to make that happen — and afford to employ staff — Asquith said: “Because of the lean nature of our business, we keep our costs down to a minimum, and as we are trying to give more power back to travellers in terms of what they see and how they stay, we don’t have any great overhead costs.

“There will be enough money that keeps it there. Take Uber for example. Uber has never made a profit.”

He added that the $1 per night fee “is enough on a global scale for us as a company to continue to invest and pioneer in travel and tech.”

“We already have a decent staff force that is passionate about the brand and the mission,” he said.

“Our mission is to really open up travel to more people and to more places, so all money is put right back into the company to allow us to continue to grow and offer more products to users in the future, of which we have some very exciting ideas.”

Air Travel Hacks: How to save money on flights

The Best Disney World Travel Tips From Our Readers