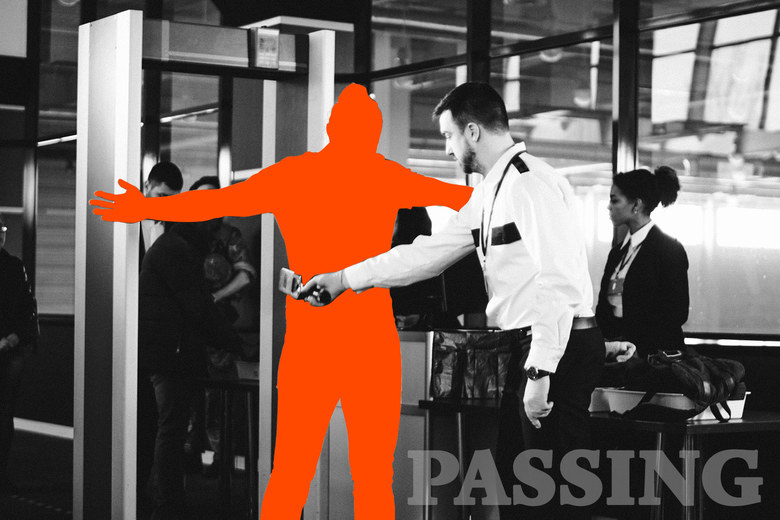 This piece is part of the Passing issue, a special package from Outward, Slate’s home for coverage of LGBTQ life, thought, and culture. Read more here.

I’m reminded of this as I wait in line at airport security, headed to San Diego for a visit home. My driver’s license picture is the photo I took for my learner’s permit at age 15. I’m wearing a flowy blouse, and my long blond hair goes halfway down my back. Today I’m wearing a T-shirt and jeans, and my close-cut hair is hidden underneath my snapback.

The TSA agent takes an unusually long time examining my ID, staring at me, then back at it. I smile nervously when he finally hands it back to me, waving me ahead. “I’m sorry, I know it’s so old!” I say, laughing uncomfortably.

I don’t completely relax until I’m through the scanner. I’m wearing my airport uniform: women’s jeans (as opposed to the slacks or men’s cargo shorts I frequently wear), and my most formfitting T-shirt. Since coming out as a lesbian and embracing the gender nonconformity that makes me feel at home in my body, navigating spaces like airport security requires an awareness I’d never previously needed.

Luckily, I’ve yet to have a major problem because of my gender presentation. But horror stories I’ve heard from other butch lesbians have been enough to make me anxious.

The constant feeling of being watched by other people and scrutinized because of your ambiguous gender presentation makes it harder to move through the world in peace.

Airport security, due to its strict screening and division by gender, is a constant challenge for transgender and gender-nonconforming people. The advanced imaging technology scanners now used at most airports scan male and female anatomy differently. When a passenger enters the scanner, an officer presses a button designating whether they are male or female “based on how the passenger presents themselves,” according to the TSA. If the machine detects anomalies—such as differences in anatomy as compared to the norm—passengers will need to undergo a pat-down conducted by an officer of the same gender.

This presents problems for transgender people, who could trigger alarms if their bodies do not conform to the expectations of the gender selected by the officer. It’s also an issue for gender-nonconforming people, including many butch lesbians. TSA officers sometimes mistake butches for men, which confuses the scanner, and butch clothing (like boxers) can trip the scanner’s alarm if they are being scanned as female. The confusion and extra inspection can cause anxiety and humiliation, and leads many butches to limit their air travel.

Irene, a butch from Georgia, had a horrifying experience flying back from Germany through Washington Dulles. The TSA agent selected the male button for her, and she set the scanner off when she went through. Normally when this happened to her, she would be asked to go through again or a female officer would pat her down. But this time, they waved her over to another line where a male officer was standing. Without verbally acknowledging her in any way, he patted down her chest with the front of his hands and just waved her along.

“I was so confused I didn’t even say anything or realize something fucked up had happened till I was on the escalator out,” she told me.

Irene assumed the agent realized she was female when he patted her down but just didn’t acknowledge it. The experience made her feel “disgusting and violated,” and she almost had a panic attack in the airport. Most of all, she was shocked it happened without anyone intervening or realizing they had made a mistake.

“More than anywhere else, I get misgendered in airports,” said Jes, a butch lesbian from Oakland. “I’ve been pulled aside before for having something ‘suspicious’ in my pants, which were just my briefs bunched up.” Jes said the TSA officer who pulled her aside seemed to be sensitive to trans issues and tried to be reassuring, but the situation was still unpleasant, and she hated how exposed she felt to people passing by.

According to the TSA, employees are required to take cultural-awareness and sensitivity trainings, including a webinar on screening transgender passengers, and must take refresher courses yearly.

“I present pretty masculine (short hair, men’s clothes, small chest), and I regularly pass as male in public if I don’t speak,” said Tash Pace, an Australian lesbian. “I’ve had heaps of experiences with these scanners where the person operating it spends a very long time pressing buttons, or they laugh with co-workers or make comments, and a few times I’ve gotten a pat-down as a result. It’s unpleasant, and really stressful and othering.”

This kind of hypervisibility makes life difficult for gender-nonconforming people. The constant feeling of being watched by other people and scrutinized because of your ambiguous gender presentation makes it harder to move through the world in peace. Never knowing how the people you interact with are going to read you can make even mundane interpersonal interaction draining.

For me, the ability to pass feels like a superpower I can’t control. If I could change my appearance at will, I would be able to feel comfortable wherever I went, but choosing to live my life as a butch lesbian means I’m at the mercy of other people’s perceptions, stereotypes, and preconceived judgements. There’s little rhyme or reason to when people mistake me for male, and sometimes it happens when I least expect it. It rarely bothers me, but when someone in a position of power over you can’t interpret who—or what—you are, it can have negative repercussions.

That’s why spaces like airline security, where agents can detain and invasively search anyone judged to be suspicious, are so precarious for gender-nonconforming people. This is magnified for butches of color, who are subject to increased threat because of their appearance. Butch women of color are more strictly policed for violating female gender norms, and for butches of color, and especially black butches, being seen as male carries danger.

In the magazine Butch Is Not a Dirty Word, contributor Jewel Robinson wrote that “the target on my back has always been my black skin. As a butch womxn, I feel my target is less around being a butch womxn than it is around being a black male, because I have been identified many times that way.”

Jessica Meyer, a butch lesbian from Minnesota, said that airport security makes her travel experiences so stressful that if a location is within 12 hours, she’ll drive instead of flying. She almost always gets flagged during screenings and has to get a pat-down. Agents are also suspicious of the CPAP machine she uses for sleep apnea and broke it the last time she traveled. She said the TSA makes her feel “like a monster.”

“Is it that weird for a woman or anyone of any gender to be wearing boxers or basketball shorts under their pants?” she asked. “Why do I need to be patted down and one time almost strip searched?”

“It is super stressful and disheartening. And you get more stares from other passengers going through TSA … they wonder, ‘What did that person whose gender I can’t tell do to need to be patted down and all their stuff tested for explosives?’ ”

Being butch means already feeling like you’re constantly under surveillance, and airport security takes that to literal levels. Whether you’re gender-nonconforming or transgender, transgressing gender norms while traveling should not be treated like a crime.

Read all of Outward’s special issue on Passing.